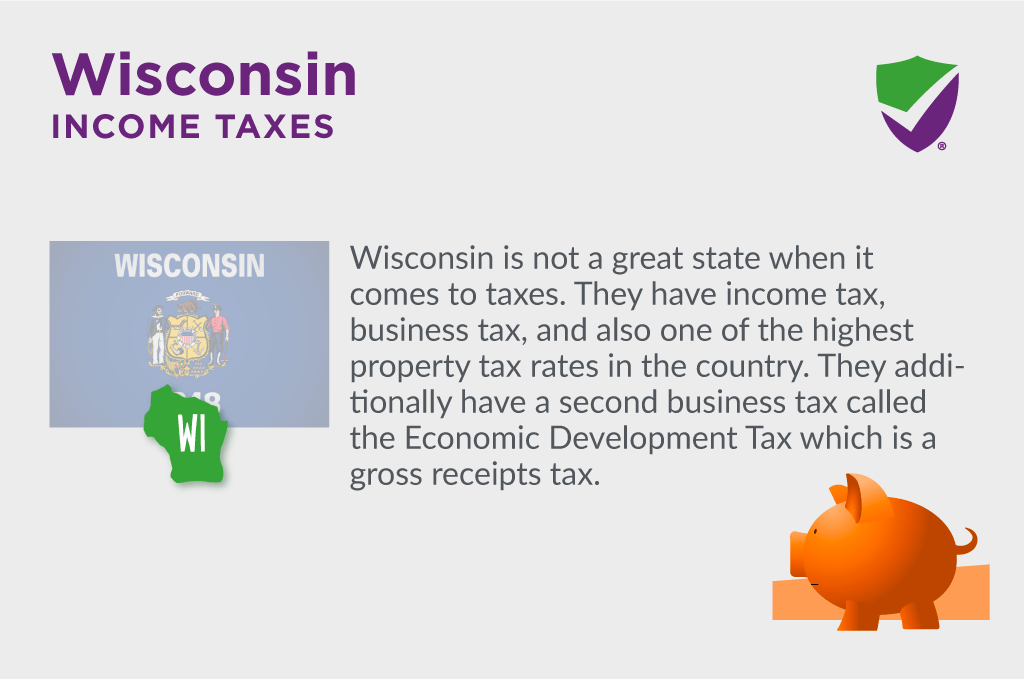 Wisconsin is not a great state when it comes to taxes. They have income tax, business tax, and also one of the highest property tax rates in the country. They additionally have a second business tax called the Economic Development Tax which is a gross receipts tax.

State Taxes at a Glance – Wisconsin

Similar to the majority of other states, the state of Wisconsin does have an individual income tax. Like most states with income tax, it is calculated on a marginal scale (four tax brackets) whose range is from 4.00% to 7.65%. The highest bracket of 7.65% starts for income greater than $263,480.

Sales and Property Taxes in Wisconsin

Property Taxes in Wisconsin – the average property tax rate for residential property in the state of Wisconsin is 1.73%, making it one of the most expensive states in the union as far as Property Tax as a Percent of a taxpayer’s primary residence.

Wisconsin’s DMV fees are not based on the value of the vehicle and are therefore not deductible on your federal tax return.

Wisconsin does not use number of days to determine your domicile. Instead, they use the following definition: “A “domicile” is a person’s true, fixed, and permanent home where a person intends to remain permanently and indefinitely and to which a person has the intention of returning, whenever absent. It is often referred to as “legal residence.” A person may be physically present, working or living in one place but maintain a domicile in another. A person has only one domicile at any point in time.”

You may learn more about Wisconsin’s domicile law on their website here.

Unemployment taxes usually consist of three factors. They are: the wage base, the range of UI rates, number of schedules. Below is an outline of the three:

Wisconsin is one of the less expensive states in regards to opening an LLC. Here are some important facts:

Important phone numbers for the Washington Department of Taxation: