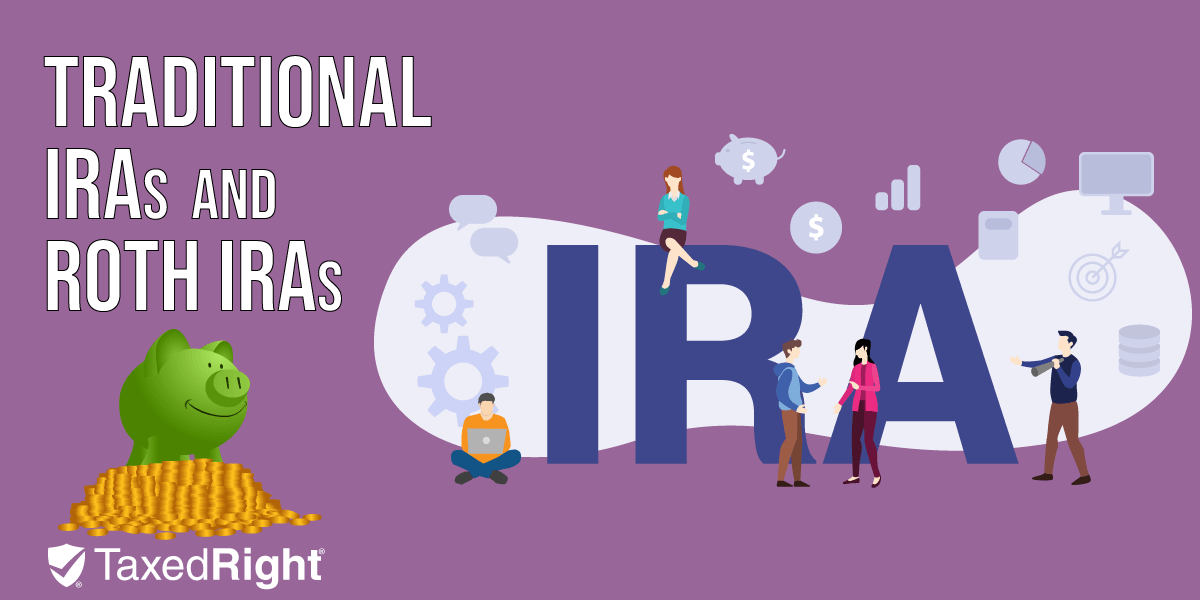 It’s easy enough for a financial advisor to tell you to start saving for retirement sooner than later. That sounds great, but how do you actually do it? If your job doesn’t offer you a tax saving retirement plan, such as a 401(k) or Simple IRA, you have no idea how to start. You might have heard of the three letters: IRA, but you’re still not sure what it is or what to do. Don’t worry, I am going to demystify IRAs. You’re going to learn how to save through IRAs to pay less tax, so you don’t get taxed by your taxes.

IRA stands for Individual Retirement Arrangement (often mis-defined as Individual Retirement Account). IRAs allow you to put money away for retirement and to not pay taxes until you are 59 ½ years old. As you would suspect the IRS has rules regarding IRAs, but before we get into the rules, we want to teach you about the two most common ones.

The Traditional IRA was created back in 1974 as a part of pension reform. It allows taxpayers that have no employer retirement plan to pay less tax when putting money away for retirement. The money is put into an account that can be used to trade stocks, bonds, and other similar equities. When you pull the money out is when you pay tax. The strategy is you put money into your IRA when you’re young and in a high tax bracket, then pull the money out when you’re older and in a much lower tax bracket. This is one way the rich pay less tax.

The Roth IRA (sometimes referred to as just a “Roth”) was created in 1997 by Senator William Roth, who wanted a way for you to pay even less tax when you’re older. The change he came up with was: when should you get taxed. With a Traditional IRA you get a tax deduction when you put money into the IRA but pay tax when you take money out. Roth IRAs are the exact opposite. You get no tax break when you put money into a Roth IRA, but you pay no tax when you take it out.

Roth IRA Example: Using a similar case as above, but instead of Tim funding a Traditional IRA, let’s say he funded a Roth IRA instead. When he’s 32 years old Tim puts $6,000 in his Roth IRA. Because it’s a Roth, he gets no deduction. But when turns 62, he decides to take out all $25,000 from his Roth IRA instead of just $10,000. Guess what? He pays no tax on the entire $25,000. This is an another way that the rich pay less tax through retirement accounts like IRAs.

Rules and Questions regarding IRAs

As I mentioned before, there are rules (and questions) you need to know. There are a lot of them, so we are going to cover the most important ones:

What’s Earned Income, and why is it important?

Earned Income is a term the IRS came up with. It’s money you make using your body or your mind. A few of examples are: being an employee, working as an independent contractor, or being a consultant. Passive income from stocks, crypto, interest, dividends, or rentals do not count as Earned Income.

In other words, if you pay Social Security, Medicare, or Self-Employment tax on the income, it’s Earned Income. You must have earned income to fund an IRA.

What’s the maximum I can fund an IRA?

The maximum amount you can fund an IRA is the lessor of:

How do I get a deduction?

If your job already provides a retirement plan (i.e., 401(k) or Simple IRA), and you make too much money, you may not be allowed a deduction. Your IRA deduction is based on many things: how much you make, if you’re married, do both of you have retirement plans at work, or only one of you? In other words, it’s complicated, so we recommend reaching out to your CPA to calculate if you qualify for the deduction.

The IRS loves penalties. So, if you take your money out of your IRA too early, before your 59 ½ years old, you will pay an additional 10% penalty on top of any tax you may already owe.

Do I have to take out the money when I’m older, or can I leave it for my heirs?

The #1 way the IRS losses tax dollars are tax-differed retirement plans like IRAs and 401(k)s. The IRS wants their cut as soon as possible, that’s why they came up with the RMD (Required Minimum Distribution). Once you’re over 72 years old (70½ , if you reached 70½ before 1/1/2020) , there is a minimum amount of money you must take out of your IRA every year. If you don’t, the IRS can penalize you an extra 50% for what should’ve been distributed to you.

If you want to calculate your RMD, you can either check with your financial advisor that holds your IRA, or there is tax form you received every year (Form 5498). The RMD amount will be on there.

By what date can I fund my IRAs?

You have until April 15th of the following year to fund your IRAs (this does not include if you extended your tax return to October 15th).

Are their limits for a Roth IRA?

You may be asking yourself, should I do a Backdoor Roth? Is it worth it? Backdoor Roth IRAs are very technical, and I’ve seen people accidentally messed them up. That’s why we recommend consulting with your financial advisor before trying this to see if it even makes sense for you.

***Congress has recently express interest in eliminating the ability of Backdoor Roth IRAs. We will update you of any additional changes that Congress may enact in the upcoming months.

How & Where to Open an IRA?

I believe that how you open an IRA depends on your age and social style. Some of you are super tech savvy and want to do everything online. Others want to talk to a live person before pulling the trigger. Here’s what I think are the best ways to open one, depending on your personality.

Young, tech savvy and rather not talk to anybody

If this fits you, I recommend opening an IRA or Roth IRA at one of the tech-friendly platforms such as Wealthfront.com or Betterment.com. I have my business SEP-IRA* at Wealthfront and never talked to anybody when I opened it years ago. It was simple and painless.

*SEP-IRAs are a different IRA that you can use only if you own a business. You may fund much more money with SEP-IRAs than Traditional IRAs. If you would like to learn more, here is a link to an article we wrote about SEP IRAs.

Not tech savvy and feel more comfortable with a traditional company

If this is you, we recommend using either Vanguard or Charles Schwab. They’ve both been around a long time. They’re both well established and you can get someone on the phone to help you. Obviously, they both have online accessibility (all IRA providers do nowadays), but they are better for people that are not great with computers or technology.

In my prior life, I use to work for a CPA firm that set up our retirement plan with Charles Schwab. My money from that retirement plan is still there. I find it easy for making trades and I don’t see the need to move it.

Keeping it all in one place

Some of you may just want to keep everything under the same umbrella so it’s easier to manage. If this is you, I recommend checking with your bank. This makes the most sense if you already have a strong relationship with your bank and don’t want more logins & passwords to remember. Most major banks have an investment arm that makes it easy to set up an IRA. All the big banks, like Wells Fargo Advisors, Merrill Lynch Investments for Bank of America, JPMorgan Investments with Chase, make it easy for you to open an IRA with them if you already have your personal or business banking there. That way you can keep your IRA on the same platform as your banking.

What about IRAs and Retirement for my business?

There are so many employer-retirement plans, we are writing an article on small businesses and which retirement plans may be the best fit. We will link it here in the upcoming weeks.

Remember, the tax code is complicated, so we covered the most common questions about IRAs, but not every possible topic. That’s why we recommend that you contact a CPA or Financial Advisor to go over any additional questions you may have.

Benefits of Opening an HSA

Benefits of Opening an HSA A health-savings account, or HSA, is one of the most underutilized saving accounts. As monthly premiums are significantly l...

Starting next year, if you’re an independent contractor, hosting an Airbnb, or are a gig worker, you are more likely to start receiving 1099s. T...

How Does Capital Gains Tax Work?

Everybody you know is now investing. Stocks like Tesla & Amazon going through the roof and the real estate market is at an all time high. You know...