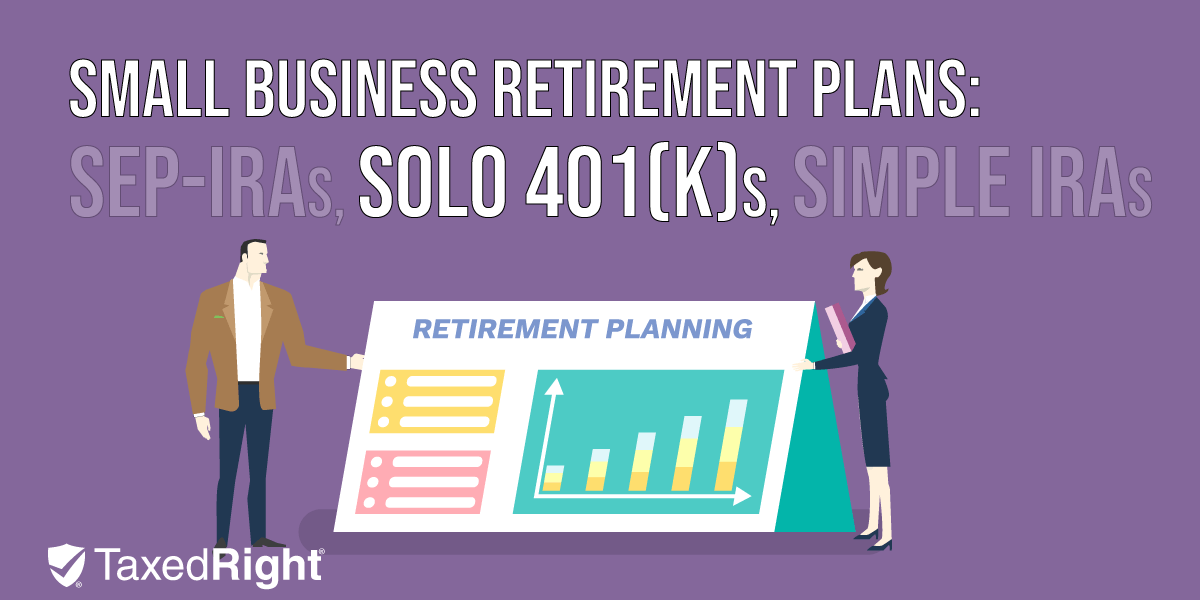 Did you know that 1 in 4 Americans have no retirement? Don’t want to be one of them. You started a small business, now can afford to put money away for retirement, but you don’t know how. 401(k)s have replaced pensions but you aren’t sure if they’re the best retirement vehicle for your small business. You’ve probably heard of a 401(k), but may not have heard of it’s little brother, the Solo 401(k). These are perfect for solopreneurs, or companies that only employ the owners.

There are multiple retirement plans you can choose from for your small business. The most popular are:

We’ve already covered SEP and SIMPLE IRAs, so today we are going over the next one on our list, Solo 401(k)s.

First things first, what are 401(k)s? Congress accidentally created 401(k)s in 1978 to limit the use of executive cash deferral plans. In other words, to make sure companies gave some of their profit to employees and not just executives.

It had a slow start, but 40 years later it has replaced the employee pension, becoming the #1 retirement benefit offered by employers. In fact, it’s now become such a staple of employee benefits, that companies can’t attract talented employees if they don’t offer a 401(k) or similar benefit.

In addition to what the employee puts away, employers give their employees free money from company profits. This free money is usually referred to as the “company match” or company “profit share.” The amount that the company gives its employees is based on how the plan was initially set up. It can be a specific dollar amount or it can also be a percentage (%) of your salary.

Each company you work for will have a different profit share. However, in general, the profit share is usually somewhere between 3%-6% of employees’ salary, up to a certain dollar limit. Using the example from above: your employer’s 401(k) plan offers a 3% match of your salary, that means they will give you additional $1,200 ($40,000 salary x 3%) of free money.

*Note: per the IRS, a married couple counts as a single participant for solo 401(k) plans.

Traditional means you get a deduction when you put the money away for retirement and pay the tax later, when you pull the money out.

Roth means you pay the tax now when you put the money away for retirement, and you pay no tax on the principal or the growth, later when you pull it out.

In either case, you can’t touch the money again until you’re age 59 ½, unless you want to pay the big-bad IRA a penalty. If you want more on the details between the two, you can read my article on Traditional and Roth IRAs here.

Contribution limits are the same for all 401(k)s (Traditional, Roth, Solo, etc.)

Before we explain how the employer profit share works, we need to define what it is to be self-employed. The IRS has very specific definition for what constitutes being self-employed. Anyone that meets one of these conditions are self-employed:

You’re probably asking yourself, what if I own 100% of my own S-Corporation? You’d think that you’re self-employed since you own it, right? Wrong.

Are there more differences between the two? Of course, but this is all you need to know to calculate the employer profit share.

Employer Profit Share for employees of Corporations – are the lessor of 25% of your employee salary (W-2) or government set maximum.

Employer Profit Share for self-employed people – are the lessor of 20% of your net income that’s subject to self-employment tax or government set maximum.

The government set maximum is reached by adding both your employee and employer contributions together.

You must fund your contributions before you file your tax return. So, if you’re self-employed, your tax return is due April 15th or (October 15th if you extend), so you need to fund your 401(k) before then.

If you own an S-Corporation, your contributions are due by March 15th or (September 15th if you extend).

Deadlines for Setting up a Solo 401(k)

Unlike SEP IRAs, which you can set up all the way until you file your extension, solo 401(k)s must be set up by December 31st, of the year in which you want the funding to count. Here’s a table:

Unlike SEP and SIMPLE IRAs, 401(k)s have a special tax return that usually needs to be filed with the Department of Labor (not IRS) call Form 5500. However, you don’t always have to file this form.

Most of the rules for solo 401(k)s and regular 401(k)s, such as deadlines & contribution limits, are the same. However, regular 401(k)s have a few additional things you will need to consider (don’t worry, we will be writing an article about that with examples, so check back soon for that.)

In the mean time, keep in mind that all businesses are structured differently and have different goals. If you are considering setting up a small business retirement plan, please check with your CPA first so they can help you figure out which plan is best for your small business.

It’s easy enough for a financial advisor to tell you to start saving for retirement sooner than later. That sounds great, but how do you actually do...

There are so many small business retirements plans it’s impossible to know which one is best for your business. The ones you’ve heard the most abo...

It’s easy to get confused by all the types of IRAs: Simple IRAs, Roth IRAs, SEP-IRAs. Let’s make it simple. If you are a small business ow...