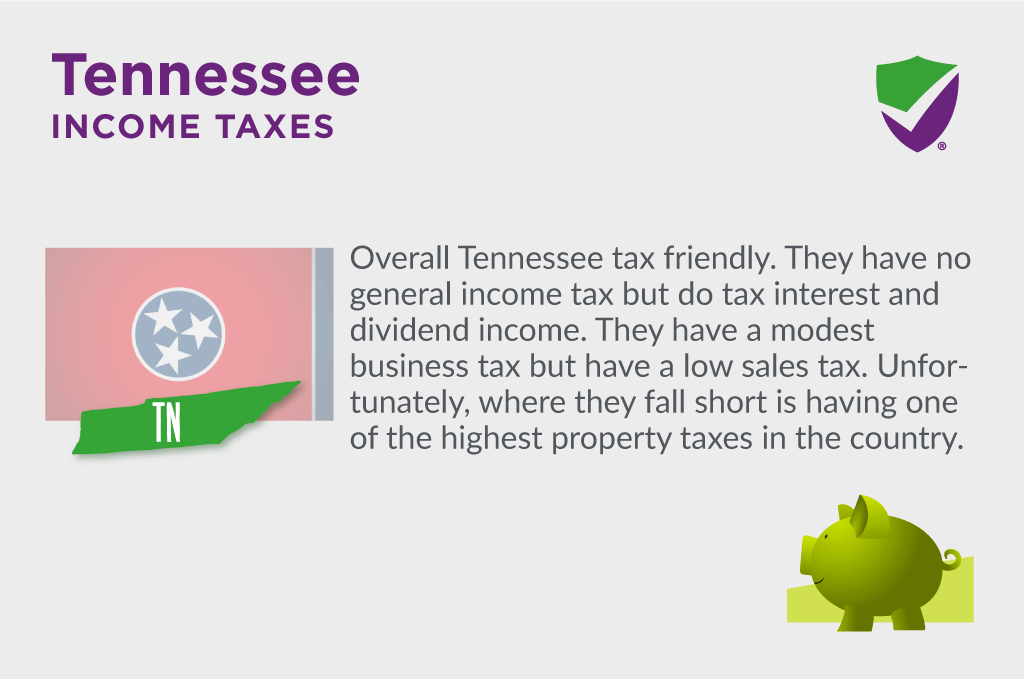 Overall Tennessee tax friendly. They have no general income tax but do tax interest and dividend income. They have a modest business tax but have a low sales tax. Unfortunately, where they fall short is having one of the highest property taxes in the country.

State Taxes at a Glance – Tennessee

Tennessee is one of the most tax friendly states in the union. It has no personal income tax.

The State of Tennessee is one of only two States that have an I&D (Interest and Dividend) Tax. The other one being New Hampshire. This is probably due to it not having an individual income tax. The I&D Tax is 1.00% for residents whose total Interest and Dividend income is greater than $1,250

Sales and Property Taxes in Tennessee

Sales Tax – like many states, Tennessee has multiple tax rates. One at the state level and another at the local level. The state rate is 7.00% the average local rate is 2.55% (total average rate for Tennessee Sales Tax is 9.55%, making it the second most expensive state in the union regarding Sales tax, behind Louisiana).

Property Taxes in Tennessee – the average property tax rate for residential property in the state of Tennessee is 0.68%, which is below the national average of 1.08%.

Tennessee has flat fees for vehicle registration. Since they are not based on the vehicles value, they are not deductible. To learn more, here’s a link to the Tennesse’s DMV website.

If you maintain a permanent place of abode for over 6-month days, you are considered a Tennessee resident.

Tennessee has an average cost to opening an LLC. Here are some important facts:

Important phone numbers for the Tennessee Department of Taxation: