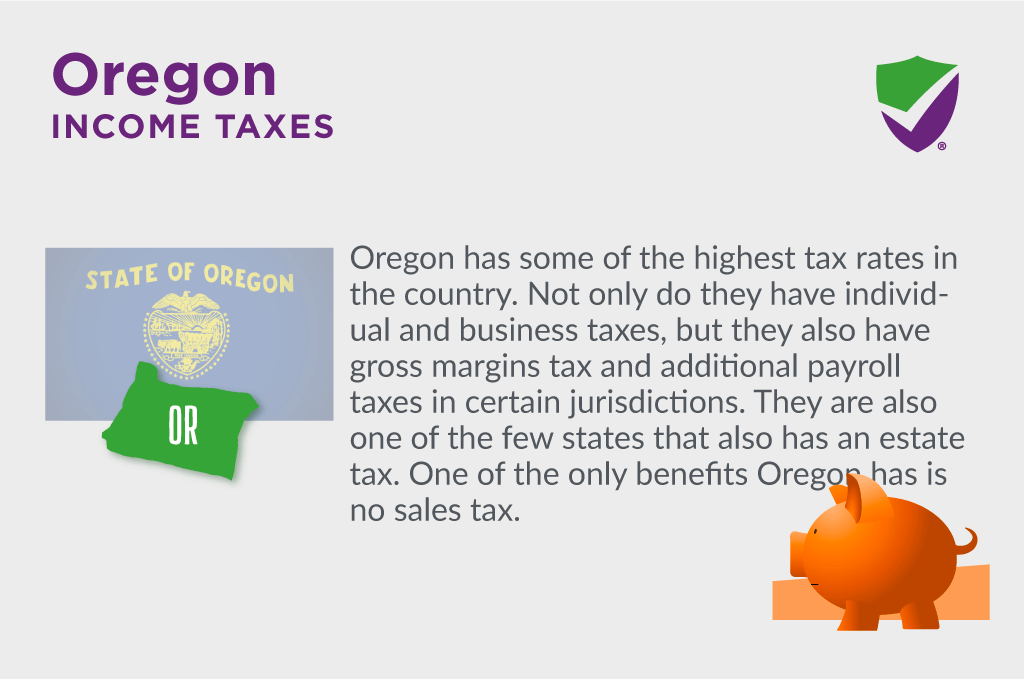 Oregon has some of the highest tax rates in the country. Not only do they have individual and business taxes, but they also have gross margins tax and additional payroll taxes in certain jurisdictions. They are also one of the few states that also has an estate tax. One of the only benefits Oregon has, is no sales tax.

State Taxes at a Glance – Oregon

The state of Oregon does have an individual income tax. Like most states with income tax, it is calculated on a marginal scale, with four (4) tax brackets. They range from 4.75% to 9.90%. The highest bracket of 9.90% starts for income greater than $110K. The State of Oregon also imposed Local Income Taxes; however, they are paid through payroll taxes. See below under Payroll Taxes.

In addition to the Corporate Tax and Excise Tax, the State of Oregon also has a Gross Margins Tax referred to as the Corporate Activity Tax (similar to Ohio’s CAT Tax). The CAT Tax is assessed as $250 per entity, plus 0.57% of Gross Receipts over $1 Million. There are certain deductions related to the CAT Tax, learn more about it at the Oregon Department of Revenue website – here.

Sales and Property Taxes in Oregon

Sales Tax – Oregon is one of only four (4) states in the union with no sales tax, yay! The other three are Delaware, Montana & New Hampshire.

Property Taxes in Oregon – The average property tax rate for residential property in the state of Oregon is 0.94%, which is in line with other states as property tax as a percent of a taxpayer’s main home.

The state of Oregon does have an estate tax that ranges from 10% to 16% depending on the size of the estate. The first $1 Million dollars of the estate is exempt from tax.

If you maintain a permanent place of abode for over 200 days, in aggregate, you are considered an Oregon resident.

Payroll (Unemployment Insurance) taxes are paid by business on the behalf of their employees to fund unemployment insurance to the state. It consists of multiple factors. Below is an outline of the most common ones in Oregon –

Oregon has an average cost of opening an LLC. Here are some important facts:

Important phone numbers for the Oregon Department of Taxation:

Over the last few years Washington has become a less favorable state regarding tax policy. They recently enacted a new income tax, albeit only though ...