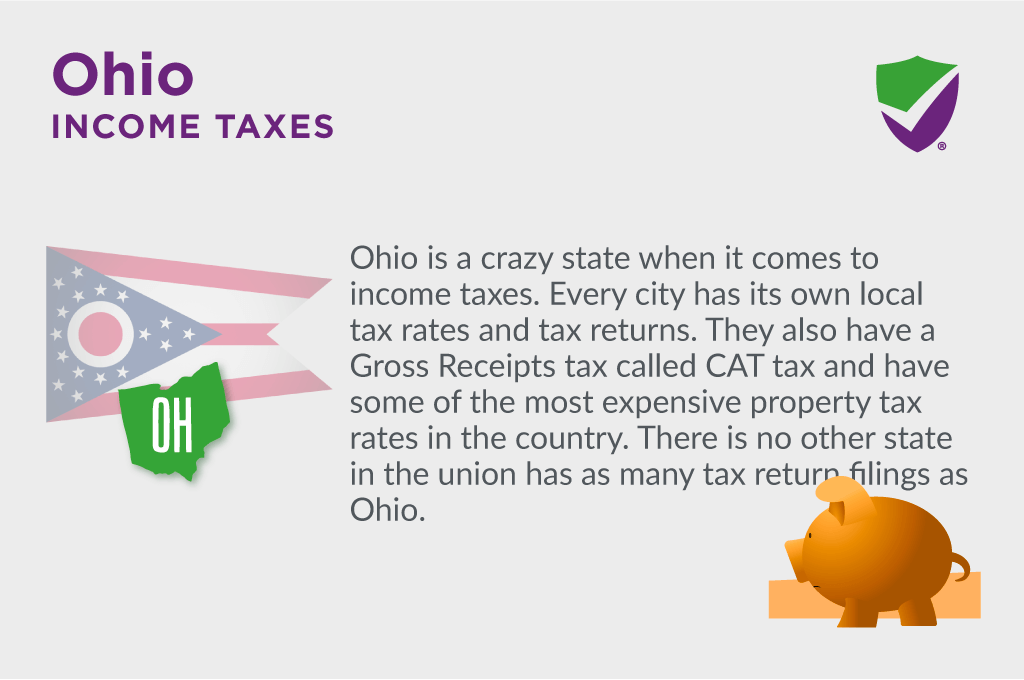 Ohio is a crazy state when it comes to income taxes. Every city has its own local tax rates and tax returns. They also have a Gross Receipts tax called CAT tax and have some of the most expensive property tax rates in the country. There is no other state in the union has as many tax return filings as Ohio.

State Taxes at a Glance – Ohio

The state of Ohio does have an individual income tax. Like most states with income tax, it is calculated on a marginal scale whose range is from 2.765% to 3.990%.

Unlike most states, Ohio cities have their own individual city tax returns (similar to the Manhattan Island Tax in New York). The average local city tax in Ohio is 1.56%.

The state of Ohio does not have a business income tax; however it does have a Gross Margins Tax called the Commercial Activities Tax (CAT).

Sales and Property Taxes in Ohio

Sales Tax – like many states, Ohio has multiple tax rates. One at the state level and another at the local level. The state rate is 5.75% the average local rate is 1.47% (total average rate for Ohio Sales Tax is 7.22%).

Property Taxes in Ohio – the average property tax rate for residential property in the state of Ohio is 1.58%, making it one of the more expensive places to own property in the country (the national average is 1.08%).

Ohio’s DMV is actually a BMV (Bureau of Motor Vehicles.) Ohio’s BMV fees are based on how old the vehicle is, not its value. Therefore, the BMV fees are not deductible. To learn more, here’s a link to the Ohio DMV website.

Anybody that has at least 213 “contact periods” within the state of Ohio is considered a resident.

Ohio is one of the least expensive states to open an LLC. In fact, it is one of a few states that has no annual LLC fee. Here are some important facts:

Important phone numbers for the Ohio Department of Taxation:

Pennsylvania is one of the few states that has flat tax rates. 3.07% for individuals, but close to 10% for businesses. They also have an inheritance t...