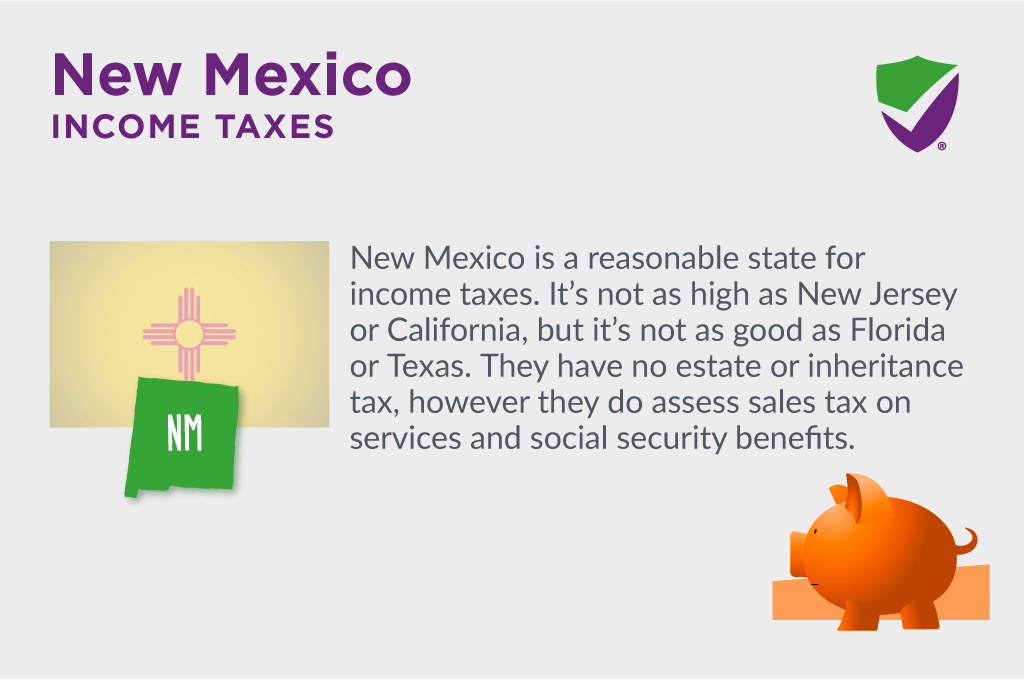 The state of New Mexico has an individual income tax. Like most states with income tax, it is calculated on a marginal scale whose range is from 1.70% to 5.90%.

New Mexico’s corporate tax is calculated on a marginal scale whose range is from 4.8% to 5.9%. They only have 2 tax brackets, the highest bracket starting at $500,000.

Sales taxes – Like many states, New Mexico has multiple tax rates. One at the state level and another at the local level. The state rate is 5.125% the average local rate is 2.71% (total average rate for New Mexico Sales Tax is 7.81%). You should take note that groceries in New Mexico are not subject to sales tax.

Property Taxes in New Mexico – the average property tax rate for residential property in the state of New Mexico is 0.66%, making it a very preferable place to own property. The property tax here is ranked as the 4th lowest per capita with average tax collections of only $792.

New Mexico’s annual DMV fees are based on weight, and not the value of the vehicle. Therefore, they are not deductible on your Federal Tax Return. If you would like to learn more about New Mexico’s DMV fees, here is a link.

If you maintain a permanent place of abode for over 185 days, you are considered a New Mexico resident.

New Mexico is one of the few states in the union that taxes Social Security Benefits. However, there are exemptions under certain cases. In you are exempt from tax if you’re:

All others must partially pay tax on social security benefits.

Nex Mexico is the most inexpensive place to set up your LLC in the country (tied with Arizona and Missouri). Here’s what you need to know:

Important phone numbers for the New Mexico Department of Taxation:

Texas is very tax friendly. They have no income or business tax, nor do they have estate or inheritance tax. The one place Texas could improve are the...