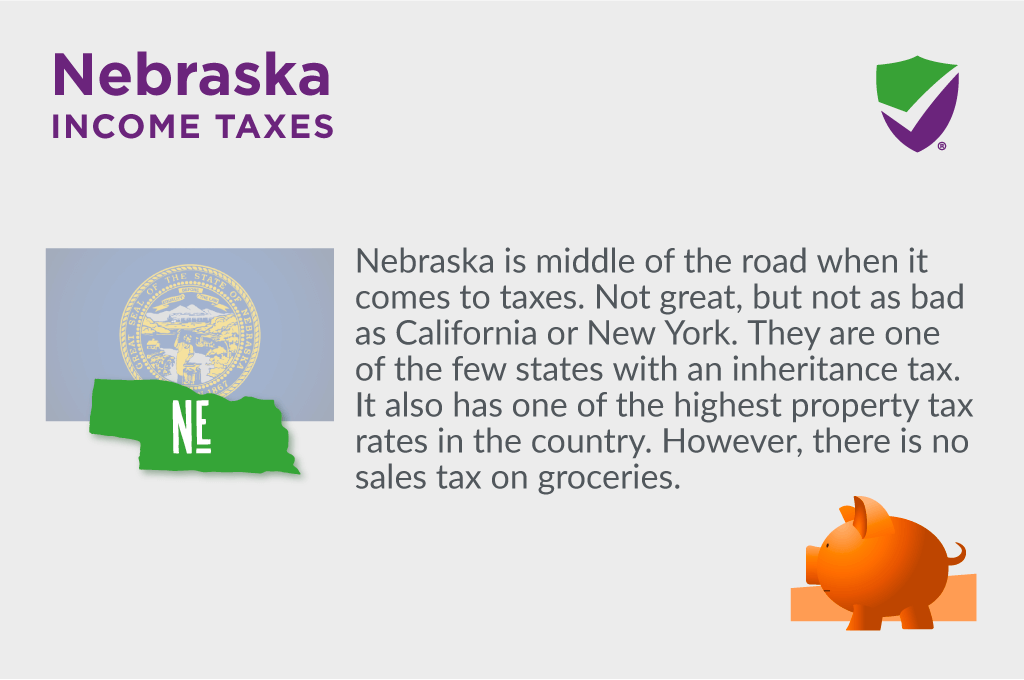 State Taxes at a Glance – Nebraska

The state of Nebraska has state income tax. Like most states with income tax, it is calculated on a marginal scale with multiple brackets (4). The tax rates range from between 2.46% to 6.84%.

Other flow-thru entities, such as S-Corporations, LLCs and Partnerships are not subject to the corporate income tax.

In addition to the corporate tax, Nebraska has franchise tax called the Corporate Occupation Tax that applies to C corps and S Corps. This tax is paid every other year (on even years).

This capital stock tax is based on a fixed dollar schedule. Similar to Georgia, this means that as taxable capital increases, the tax rate decreases. The tax ranges from $26- $23,990 of paid-up capital.

Here is a link to the Nebraska Legislatures law on Corporate Occupation Tax.

Sales and Property Taxes in Nebraska

Sales Taxes – Like most states, Nebraska has both a state and local sales tax. Its state sales tax is 5.50% and its local sales tax has an average rate of 1.44% (which puts the state average 6.94%). It’s good to note that there is no sales tax on groceries in Nebraska.

Property Taxes in Nebraska – the average property tax rate for residential property in the state of Nebraska is 1.61%, which is well above the national average. Nebraska is within the top ten most expensive states regarding property tax as a percentage of value.

Nebraska is one of only six (6) states that requires beneficiaries to pay taxes on an inheritance. Depending on who the heir is, the tax rate ranges from 1%-18% and the exemptions range from $10,000-$40,000. Here’s the break down

A portion of the Nebraska DMV fees are a tax based on the MSPR of the vehicle when purchased. The tax is anywhere from $25 to $1,900 depending on how long you’ve had the vehicle. Here’s a link to the Nebraska Vehicle Tax Table.

If you maintain a permanent place of abode for over 6 months and have been present in Nebraska during that time, you are considered a Nebraska resident.

Nebraska is one of the few states that partially taxes social security benefits. However, there are exemptions under certain cases. In 2022 you are exempt from tax if you’re:

All others must pay partially on social security benefits.

Here is a link to the 2022 Nebraska Legislative Changes that effect Social Security in Nebraska.

Unemployment taxes usually consist of three factors. They are the wage base, the range of UI rates, number of schedules. Below is an outline of the three:

Nebraska is inexpensive in regard to opening an LLC. Here are some important facts:

Important phone numbers for the Nebraska Department of Taxation:

According to TaxFoundation.org, Wyoming is the most tax friendly state in the union. There are no income or business taxes in Wyoming. Also, it is a n...