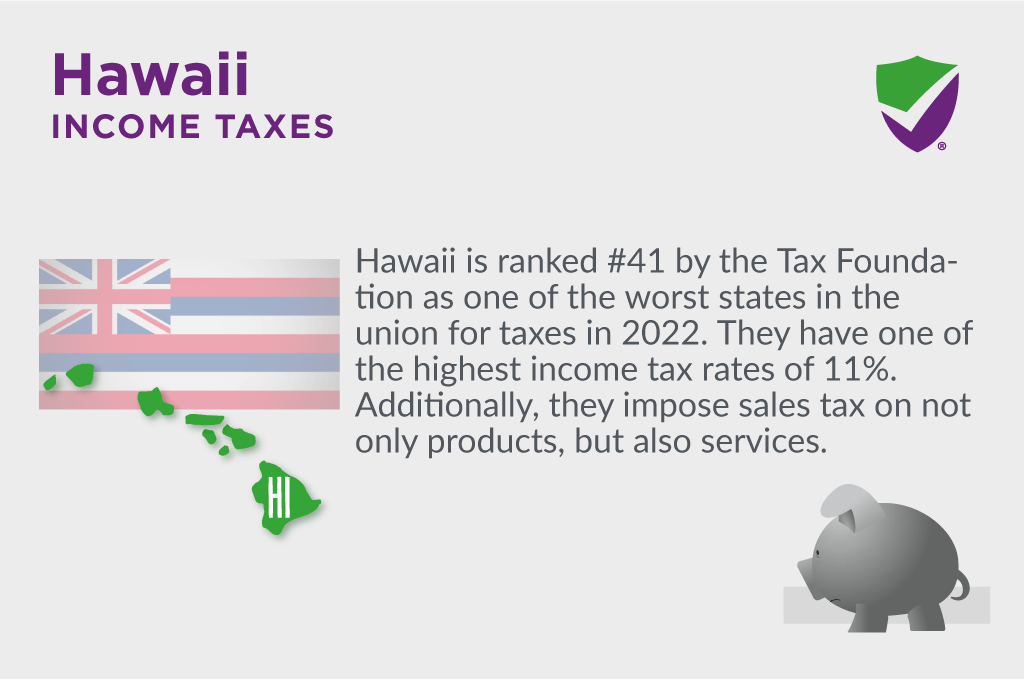 State Taxes at a Glance – Hawaii

The state of Hawaii has a Corporate Tax rate which is also calculated on a marginal scale. The Corporate Tax is only assessed on C Corporation (other flow-thru entities, such as S-Corps, LLCs and LLPs are not subject to the Corporate Tax but are subject to individual state taxes). The Corporate Income tax ranges from 4.40% to 6.40% and the highest bracket starts at $100,000 broken down as follows:

The state of Hawaii imposes a “hotel tax” on gross receipts of rentals, hotels, motels, etc. Starting on 12/14/2021, the county of Oahu (which includes the city / county of Honolulu) has imposed their own TAT tax (OTAT) as well. The tax rates are as follows:

Sales and Property Taxes in Hawaii

Sales Taxes – Like many states, Hawaii has multiple Sales tax rates. One at the state level and another at the local level. The state rate is 4.00% and the average local rate is 0.44% (total average rate for Hawaii Sales Tax is 4.44%) which is a low sales tax compared to most of the country.

Sales tax on services – Most states apply the sales taxes to only final retail sales. However, Hawaii’s sales tax has a broad tax base that additionally includes many business-to-business services. (Similar to New Mexico, North Dakota, South Dakota, and Washington State).

Property Taxes – the average property tax rate for residential property in the state of Hawaii is 0.31%, making it the lowest state in the union as far as Property Tax as a Percent of a taxpayer’s primary residence.

The state of Hawaii does have an estate tax that ranges from 10% to 20% depending on the size of the estate. The first $5,490,000 Million dollars of the estate is exempt from tax.

Florida DMV fees not based on the value of the vehicle, rather on its weight. Therefore, they are not deductible on your individual tax return. You may look up your fees on the Hawaii DMV website here.

Hawaii presumption is that it’s your permanent place of abode (domicile) if you’ve lived there for over 200 days during the taxable year (a little more than the usual 183 days that most state adopt.)

Even though Hawaii has an income tax, social security benefits are not subject to state tax in “The Āloha State.”

Payroll (Unemployment Insurance) taxes are paid by business on the behalf of their employees to fund unemployment insurance. It consists of multiple factors, such as taxable wage base and UI tax rate. Below is an outline of important factors regarding State Payroll Taxes in Hawaii –

Hawaii is one of the less expensive states in regards to opening an LLC. Here are some important facts: